My mother has a problem with my writing. She dislikes my poems to an extent that she makes a face that becomes a visual adjective to my “depressing” content. She reads them on my Instagram page without any acknowledgement of reading it. I usually get to know about her opinion when we sit together in the drawing room with friends. And that is the time when I am honoured with the most criticism for my poetry. My sister has a problem with my paintings. She rejects them as gloomy and saddening. When she watches me paint, she walks by without any curiosity to know which canvas I was spoiling. My father has a problem with my solo travels. He finds them weird and forlorn, needless and dangerous. He cannot fathom the idea of why one would want to travel alone, to far off places and how would I cope with an assault.

I am told that I write about things too blatantly. I show disrespect towards religion and how most of my writing revolves around denigrating it. How I often choose to speak of the ill sides of religion and not showcase the good it brings. Some of my friends find my articles too complex to comprehend. Some say they have to read it twice to understand it. And when they do, they find the content too intricate that gives them a headache. My insurgency against dogmas and pretentious art of living may introduce me to a social isolation, however who has ever believed societal gratification anyways. My obsession with doing real things has my sincere conviction. 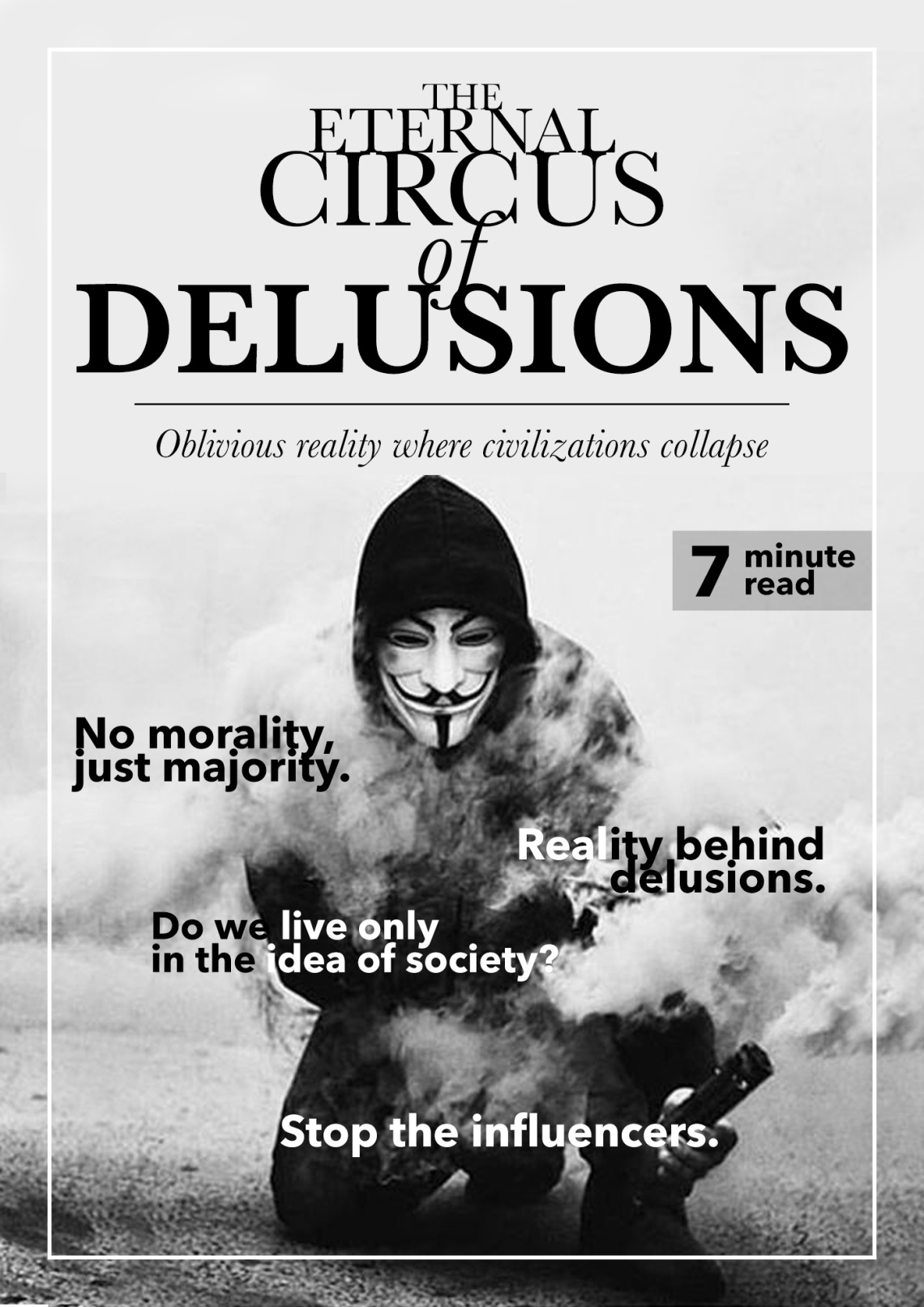 Why are people scared of the real? What is wrong with the explicit affirmation of the real un-imaginary world? What is it that people reject about real things? Do things that are very real, challenge the whole human capacity to experience vulnerability? Do we become unprotected, exposed, and defenseless about our own being in our own interpretation of our world? Is this the reason why we don’t always want to know the truth but are satisfied with disguised versions of it? People are blinded by fanciful figments. They don’t want to see the reality and which is why Manto fails and why Shah Rukh Khan sells.

Why do our actions, opinions, judgments, desires, our criticism, our assumptions have an implicit accomplice at the back of mind by the name of “society”? Why have we preserved or nurtured the idea of what will ‘they think” even if we don’t believe in what they think? The society that we live in is said to be a macro level concept. But I believe we don’t live in a society at all. We survive only in the idea of a society. And this unreal idea of an unreal society is what makes us believe in the unreal things we do for the unreal gains from this very society.

Let me give you an instance. Imagine there is a group of 100 people who believe in the idea of nudity. So if 100 people live without clothes then that is usual or a conventional way of living. In the other case, of the 100, imagine just one or two shed their clothes, then that is a problem. Because a few of the majority is exercising its belief in nudity against the beliefs of the said society. Hence, the understanding that often anything that you do that does not fit in the social code of conduct, is not at all a question of morality. It is only and only a question of the majority. It is profoundly ironic how ninety-nine against one is cultural and how one against ninety-nine becomes rebellion. This is where the idea of society fails.

Most of our desires that we kill in order to conform to this society, that very society disintegrated into an unthinking demented mob. The mob seemingly wanted to radically revolutionize the system in a day. Blinded by their own ignorance and keeping the ecosystem at stake, they snatched the integrity of every citizen with their defiance, which was only an exhibition of how civilizations have collapsed in this chaos in the past. Those weren’t the buses that were stoned; they pelted the face of the society of which a day prior and a day later they too were a part of. Those weren’t the vehicles that were flamed; they torched the society’s ego that held the other captive of its social class. And for those who only watched from a distance, rubbed their eyes perhaps to see which reality existed behind societal delusions.

It is unfortunate that nothing can ever be resolved about this reality. Keeping aside employment with reservations, eradicating casteism will bring unemployment to the politicos. What will the Mayawatis and Owaisis do then? The dreams of Make in India won’t flourish until the nightmares that were made in India are demolished. We are the participants in this eternal circus of delusions. If you are educated you are bound to be a part of the macroeconomic instability that will stay unsustainable forever. If you happen to pay a lot of attention and recognize the real problems, you will be distracted to a fresh war with Pakistan that never happens. This government deception is a sustainable resource that never exhausts. It is made with the perfect combination of pseudo liberals and chauvinists who with a candle in hand will keep spreading darkness on the light of the real subject.

The trains will stay crowded, lifestyles will stay fake and the IQ will keep falling. Your literacy is put to use only for online shopping and making #tags. There are influencers out there who will first cry with you and then promise to cry for you and then watch you cry. And you, incomprehensibly, will destroy your children’s future by giving them your opinion and taking away theirs. Under the garb of guidance, the Zakir Naiks or the Adityanaths will induce your intellect; con you with this circus of delusions. It is said that if you give a man a mask, he will show his true self. Seize those masks. Stop the influencers. Call their bluff. Become an antidote. You don’t have to bring about a revolution. Sometimes you just have to unlisten and question. Speak the truth looking into eyes of the frauds. Unless you courageously counter these culturally condoned chauvinists consistently, they will continue controlling your conscience for their corrupt causes.

This is the reality.

Reality to me is like the glass that I see half empty. I always see the glass half empty when it is half empty. Wonder how it makes me a pessimist seeing the state of the glass’s existence in its present capacity. When the glass is half empty, know that the other half empty needs to be full to complete the whole design purpose of the glass. Optimism is wonderful but it demeans the rationality of form and function in the present. If you do not validate the purpose today, you cannot evaluate its prospect tomorrow.

One can stay oblivious to the reality but not escape it. It doesn’t really matter if I am called the irrelevant intellectual. At least I’ll be the man with some real substance to identify myself with.

Just like any other man I am minced into several palpable interpretations of me. Although I don’t come to you with optional avatars of me that you can choose, but most often your affinity with proximity of me decides which one to keep and which one to leave unexplored. I write pieces that might seem coming from an intricate mind. I look into things that usually the world stays oblivious to. At times I harbour partial dementia because today sanity is more of a quantitative attribute than a behavioral characteristic. Meaning, in a psychiatric ward of 100 patients, the ones with a deranged mind are the few doctors. I can read few authors till my back pains and few until my head. If a train is passing before me, I will see it go till the end. I drive to reach places that I have never been to; otherwise I simply commute. I used to love cricket until they started their acting career. I cannot fly kites because if I am looking at the sky, my head must rest on my hands. I love the idea of Superman, he can fly, he saves, and he is powerful and yet humble. Sometimes I feel I am the chosen one, but I still have to figure out what for. I do not understand money and god; we have ego issues. I believe men are not from Mars they are from Venus. Men come from women and women come from Venus. See the logical connection? My favourite colours are white and black. I love stationary, dark chocolates and coffee. I love the Moon and I think aliens live there. I am, Gaurav Chavan View all posts by GC